Minnesota and a Roller-Coaster

The last week of October was spent at the University of Minnesota for the Natural History Study. My dad went with us, which was great. I enjoyed his company AND help, tremendously. Even though it was only our second time there, I felt like an expert at the routine of the trip. Getting to the airport, getting through security, what I needed for Liv, flying, getting our rental car, getting to the hotel, GPS, etc.etc.etc. I know all of this seems routine, but the first time we went, it was nerve-wracking. Anyway, it was a smoother process this time. We flew in on a Monday, and got there at a decent time. Enough time to venture out and have a little fun. I decided that we should go to the Mall of America. I’d never been before, so I thought what a perfect time to go. We arrived at the mall around lunch time, and all that morning Liv had been telling me “play.” This meant that she was done sitting and wanted to get up and play! I was, too! So, we grabbed some lunch and sat around the edge of the food court and watched the roller-coaster’s, rides, and fun going on around us. Livia was so excited, and secretly I was too! I did think that the amusement park would have been bigger, but it really is a nice size for little kids. Not too overwhelming. So we ate and then went for some fun. When we got our ride tokens, Liv bolted to the Merry-Go-Round. This has always been her favorite. I love how vocal and giggly she gets when she’s enjoying herself. It really is the best sound! My dad watched us go from ride to ride. Since Livia has special needs, I got a special pass that allowed me to ride with her AND it didn’t count against her tokens. Pretty nice. She was having so much fun that I decided we should step it up a notch and try a “real” ride. There was one coaster that didn’t have flips and looked pretty safe. She JUST made the height requirement and I was secretly jumping up and down inside myself. We jumped in together and off it went. There was that typical incline before the ride really took off. I did have a temporary moment of “oh no, what did I get her into. How is she going to react to this?” It started going faster than I expected. After that first turn, I heard it…..squeals of laughter and enjoyment. We could see my dad standing below and I told Livia to look at Papa and wave, she said “PAAAPAA.” It was perfect! We went on the ride twice.

The rest of the MN trip went pretty much just like the last one. We even stayed in the exact room as last time. We had great accommodations and were treated well. Dr. Whitley took a lot of time talking to us about potential therapies, time lines, and procedures. Developmental testing is the tiring day. At least Livia gets to play during this day. Lots of forms to fill out. YUCK! Some of the questions they ask are frustrating, but necessary. Then it’s the day in the OR. Livia did a lot better this time because she didn’t have to have her tonsils or adenoids messed with. She is such a trooper. Good traveler, and brave patient. During the wait while Livia is in the OR is when Dr. Shapiro comes in to talk to us about Liv’s developmental testing and the forms I filled out. This is really the worst part. They tell us where she is functioning compared to her age. We know that she has digressed some, but to hear the things out loud that the Dr. has to say is always hard. It’s moment’s like this that I have to remind myself why we are here. So, to end this post, I’ll share the pic of Liv and I on the roller-coaster. 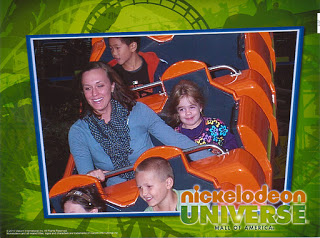